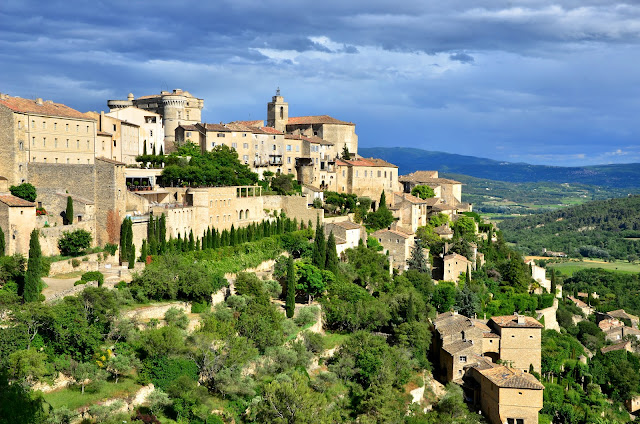 And the waving wheat can sure smell sweet when the wind comes right behind the rain.
-Rodgers and Hammerstein
Oklahoma! 1943
We aren’t in Oklahoma today we’re in another place where the thunder rolls and the wheats a wavin’. 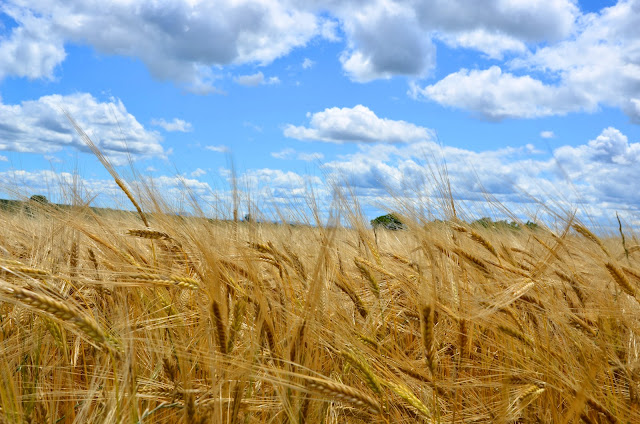 We’re visiting a place where the sound of saying good day, {Bonjour} and thank you, {Merci} come out of the mouth like you’re about to bust out in tune. As we made our way into various shops throughout Provence, {even at the grocery store} the eye contact, smiles and song of a simple hello and thank you made my soul giddy. The French countryside seemed like such a peaceful place.
I can see why Monet created amazing work here.
Welcome to our journey through France! 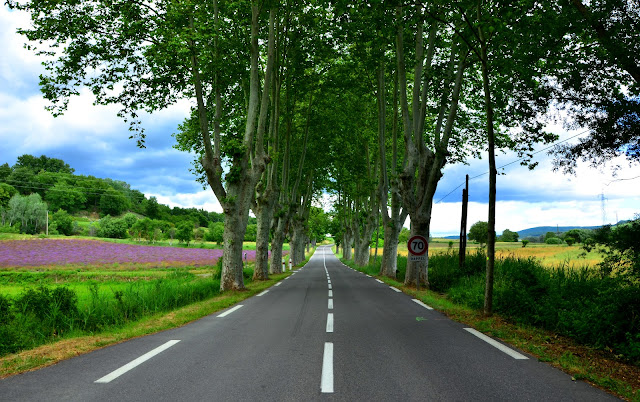 As we were making our drive to Portugal we knew we wanted to stop off and view the lavender fields that are scattered throughout the Provence region of France. 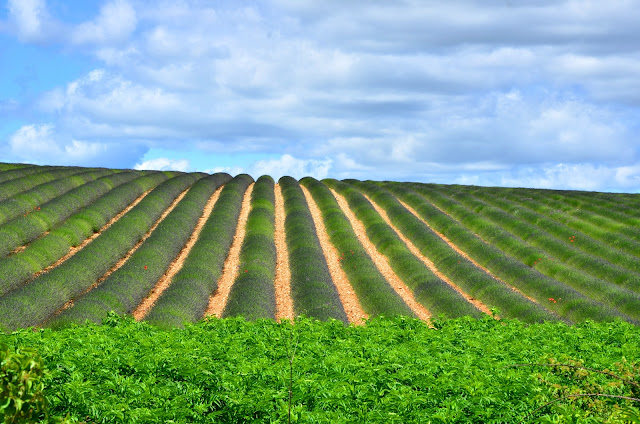 When we scheduled our move from Naples to Lisbon we were scheduled at first to go a week later than we did. We quickly discovered that one week can make a difference in bloom time. 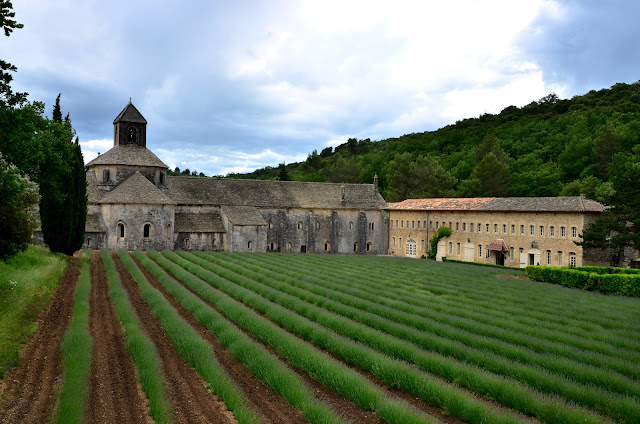 Normally the lavender fields at the Senanque Abbey, located in the photo above, are rows of purple gum drops during the summer months. When you get down closer you can see they are budding but not quite ready. The official day of summer is June 21st and we were here on June 12th. So if you’re planning a trip to see endless rows of lavender in Provence, France make a visit closer to July. 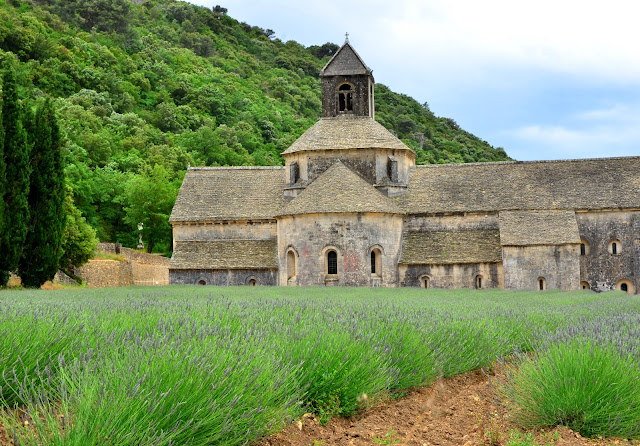 The Senanque Abbey is located after you leave the town of Gordes on D177.
Here is a link to a website for all sorts of holiday ideas in the Provence region.
http://www.avignon-et-provence.com/index-en.html 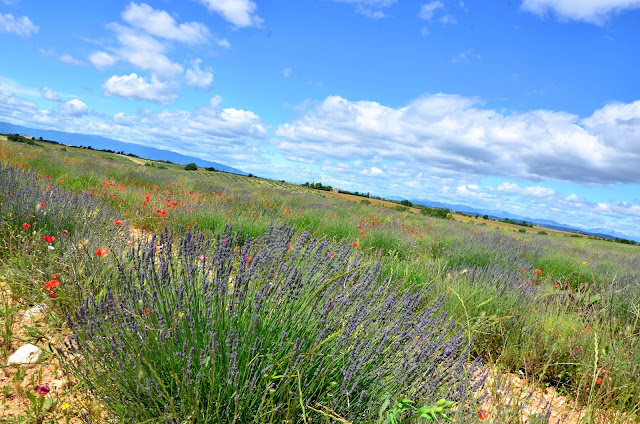 Before the wind takes us right behind the rain let’s visit Lake of Saint Croix located in the
Alpes-de-Haute Provence. 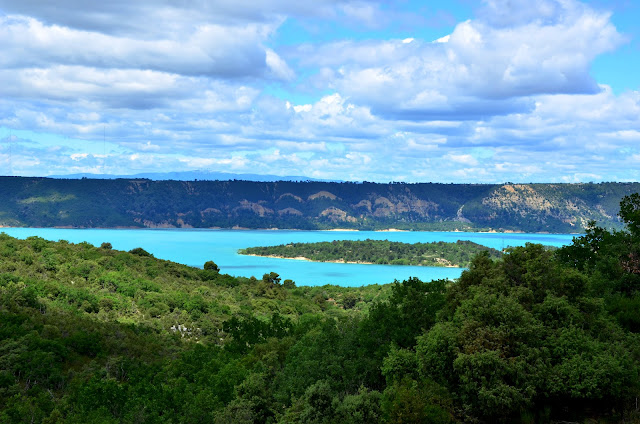 We had been driving for a bit when all of a sudden this turquoise lake pops out from the ridge line  I felt as though we were headed into the Caribbean instead of into where the waving wheat was blowing. The Alpes-de-Haute Provence is filled with more than a musical that is performed on Broadway. The land is filled with words that don’t fit into a dictionary or a thesaurus. 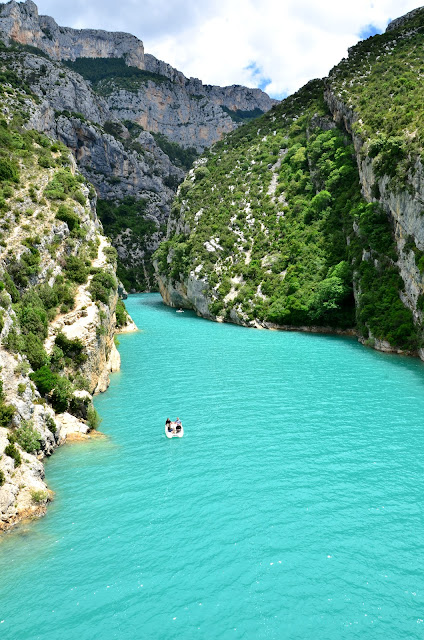 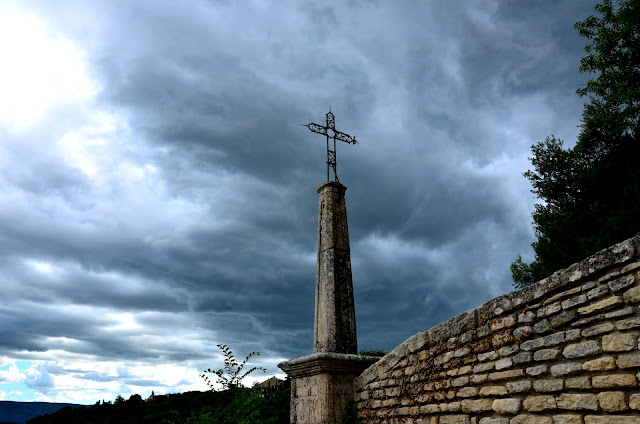 Shortly after our mental dip in the lake, we made a stop in this quaint and colorful town between Lake of Saint Croix and the town of Gordes. 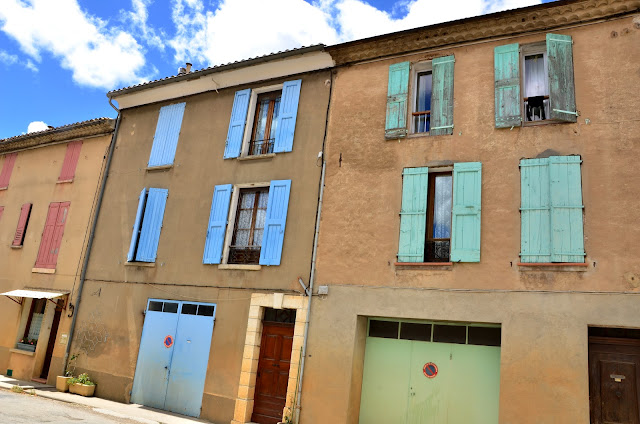 This is the town of Puimoisson. Mayer and I walked the inner streets, stretching our legs while David did a bit of re-assignment in our hamster like vehicle. My husband is the type who needs to touch and compartmentalize everything. I guess he felt that he needed to do it again after it was packed so nicely to begin with when we left Monaco. In this town, I lost all that paints me and makes me what the world sees. You know, the stuff that helps you get ready for work. The stuff that enhances the natural fibers God made of you. The stuff women think they need to face man. 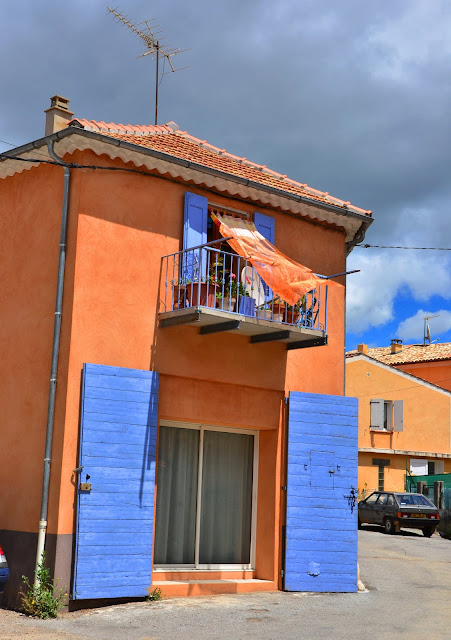 We left all of our jewelry, our bathroom fancy fluff, and hygiene products that help you smell better.  We donated, almost all, of our jewelry and replaceable items to a lost and found department in this town.
We hadn’t realized the bag was missing until we were unloading the car to check into the hotel that night. David said, (as we were getting ready to shut the trunk), “That’s all we need right, the two black suitcases?” “And the white bag with our bathroom stuff and jewelry,” I said. “Where is that bag?” David asked.
“It should be smashed in the side by the window,” I replied. His face turned white and it hit him. We donated our breath freshening, armpit fragrance and all my product dependency to someone in France. I hope who ever found it needed it  more than we did.
Earlier that morning I thought about putting my rings in that toiletry bag, my hands were swollen from overindulging. Glad I didn’t. I did put my cross necklace on that my MeMe had given me seven years ago. I had left my turquoise necklace, which my friend Tammy Koeppen had brought my way a few weeks before we left Italy, in my purse after our overnight in Pisa. 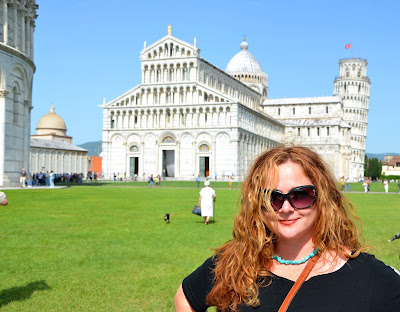 Before hitting the road that morning I had read this devotional from Purpose Driven Life online called, “Resolve to Manage Anger”.
Click here for the link.
It was like another test had been given to me to deal with anger. A few days before the so called “donation” we had  had all of our credit card information stolen while moving and then everything that dresses and cleans the physical was left on the side of the road right next to  Jesus on the cross. 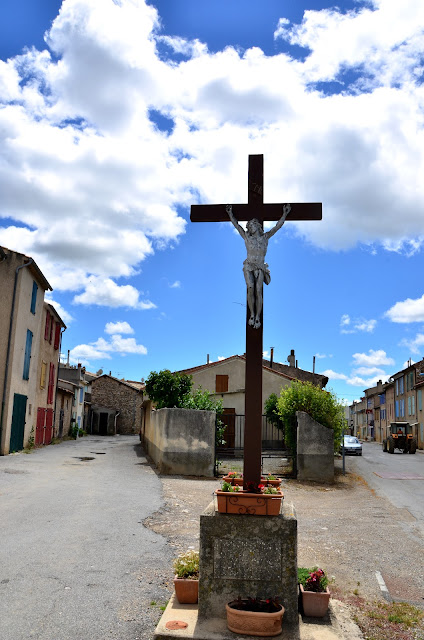 Being cramped in a Mini-Cooper with two boys whose gas levels were off the hook, didn’t make frustration levels any easier but I was so surprised at the initial calm I had after reading that devotional. I said, “Well we can’t get it back so why worry?” I initially didn’t get angry and lose my temper. I had thought about what I had read earlier. Plus my husband felt horrible.
I won’t say my reaction a little later evening was the best when we had to purchase everything from scratch.
God does give us the emotion to be angry. Jesus got angry when he saw his father’s house being ran like a marketplace. God got furious at man and flooded the earth. He sent us a rainbow with a promise he would never do that again.
We rounded the corner coming out of this grand land to a rainbow!
It was as though the wind had truly swept away the rain. If you have the chance to see this part of the earth, you won’t regret it. The waving wheat did end up smelling sweet in the end even after a bit of a storm…..
{Au revoir} Goodbye! 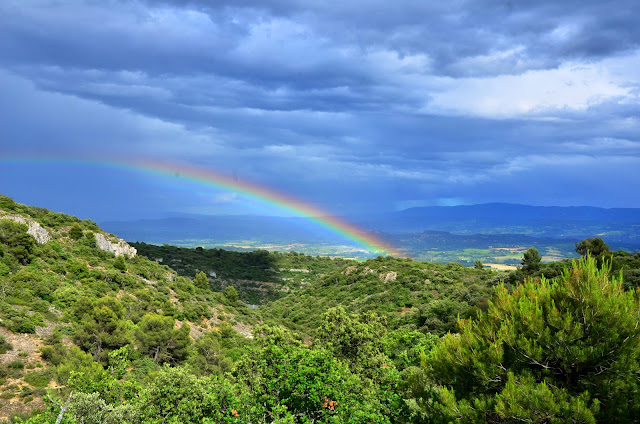