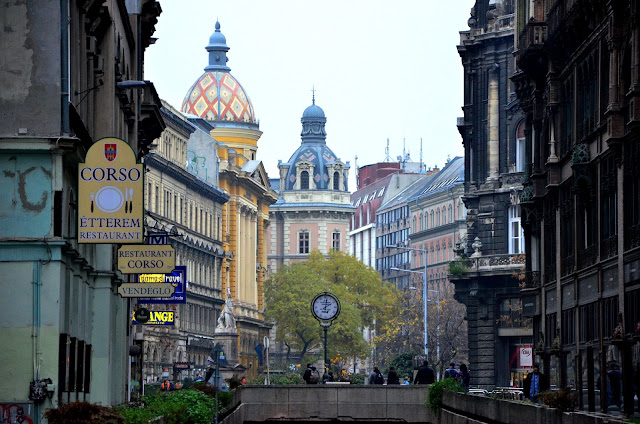 From unexpected views, to unexpected shoes on the Danube River, our trip to Budapest was filled with the unexpected from start to finish. {Well for myself and Mayer.} Have you ever met a party planner? Or know someone who loves to plan everything? My husband is a planner in our home. Especially trip planning. It’s his thing, like football or baseball is to some men, travel planning is my husband’s hobby.  I think it’s like some kind of addiction he has. We barely chop through one adventure before I hear I booked the hotel in such and such location. I am careful to suggest things because if I do, he will usually say, “I already have that down.” 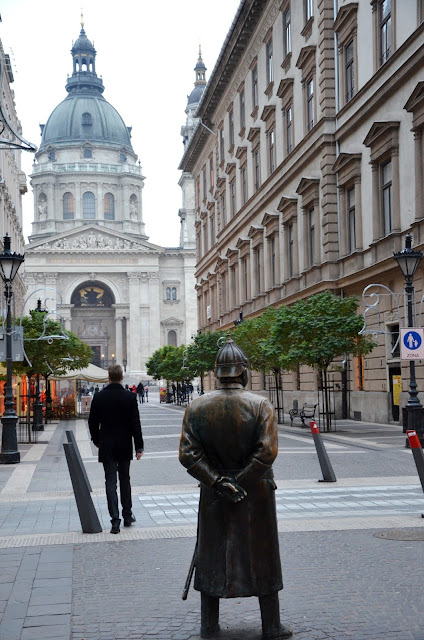 He has his plastic folder all neatly organized with our boarding passes printed off. The seat assignment and row we’ll be sitting on while flying in the air is being completed. Sheets of GPS coordinates, metro lines and bus stops are crisp and in a certain order. Maps that are color coordinated and photos of sites strategically placed along the metro stops and streets we journey along are in their place. 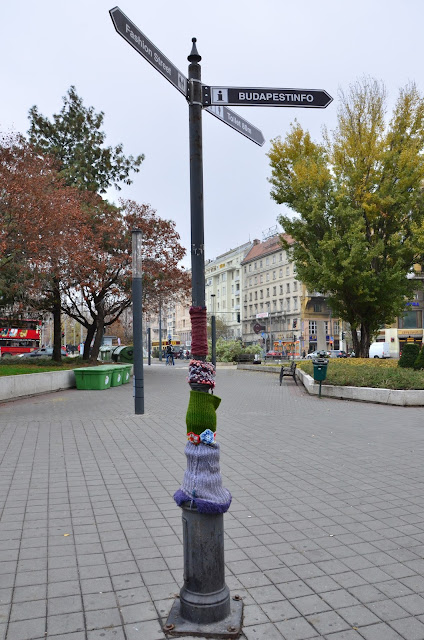 Living in the unknown and unexpected is truly my life! {Have I ever mentioned that I’m a fiery red-head who loves the unexpected?} I do not like ritualistic kind of living, so it is best that adventure in my home is planned this way and leaves me walking along the unexpected route. It keeps the pot stirring to a minimal. I voice my requests of what I want to see and enjoy watching my husband fumble through printouts bringing forth the unexpected sites. Something I did know before my feet landed in Hungary was that the Christmas Markets would be kicking off the weekend we arrived.
I knew that there were thermal baths.
Mayer knew he was going to experience Aquaworld.
We knew we would be gifting our tongues with Hungarian soups and flavorful meals. 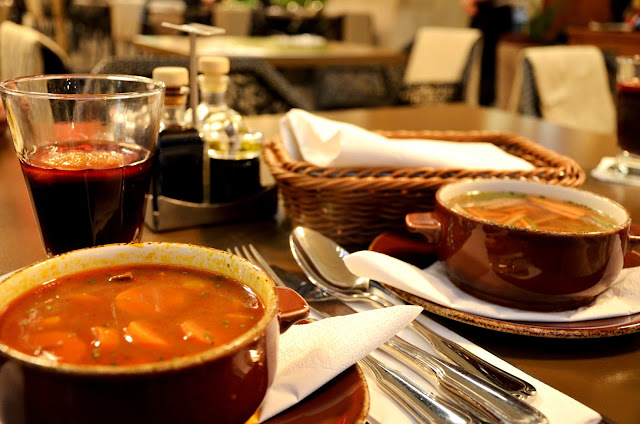 But some unexpected events and sites that came into view were truly that, unexpected.
{Even for my type A personality of a husband.}
Take for instance, running into the 40th president of the United States of America.
What? That’s right, we ran into the 40th president of America also known as a Crusader, Ronald Reagan. Many Hungarians honor Reagan because he helped secure their freedom from Communism and Soviet Rule. His bust was just walking along in Freedom Square when we came across him. 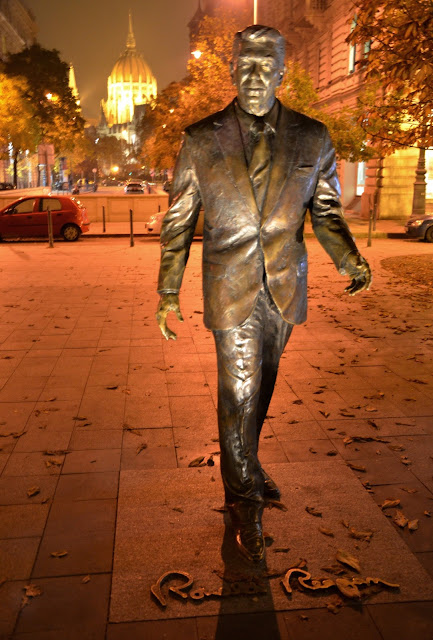 Ronald brought the unexpected, even to a man who likes to plan everything.
Another truly unexpected surprise was
the changing of the guard at the Royal Palace. 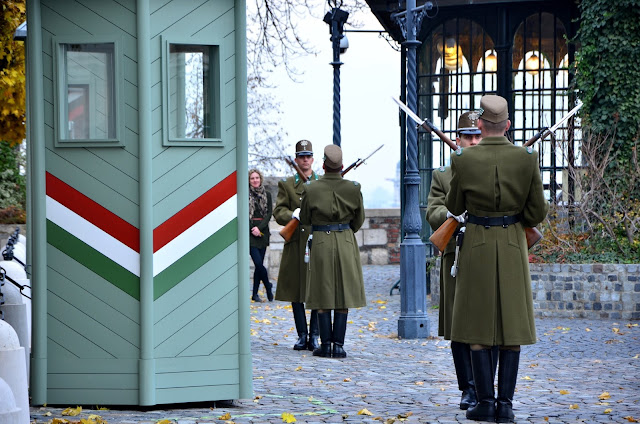 Now if you don’t have a tour guide or a top notch-husband-travel planner in your life, then you may have a difficult time finding the changing of the guard. David didn’t have it on our list of things to do. It started taking place as we were buying a chimney cake at the Christmas market. So I left the boys and ran up the hill to take photos. It was unexpected. 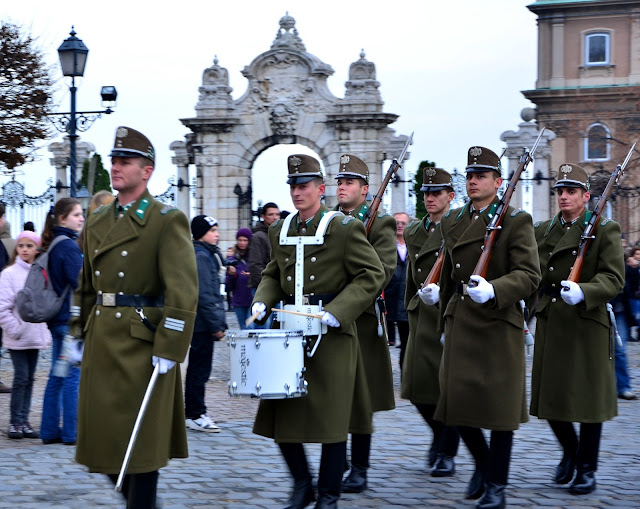 It’s fun to walk over the Chain Bridge at various times of the day. I did have an unexpected shot of a man leaving his excrement along the side of the bank. I quickly told my husband to have Mayer turn the other way because I know my son would have had a hay-day seeing that unexpected site. He would have a hard time getting that image out of his head. {I know it’s still in my head and the shot I got was visual but not a photo on my digital disk.} Making a journey along the Chain Bridge changes unexpectedly from daytime to nighttime.

As you move from the pest side, to the buda side, which is located on the west side of the Danube River, where Fisherman’s Bastion and Castle Hill is located, an unexpected treat up to Castle Hill was a ride on the funicular. It was jammed with people and thankfully it was a rather quick ride. We were standing up, pressing against the glass. 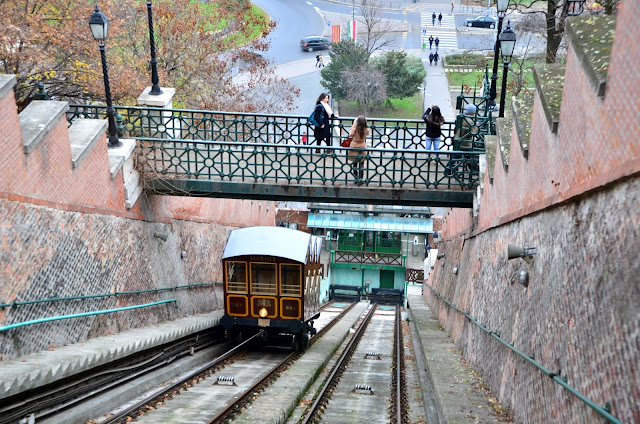 The funicular stops at the Buda Castle or Royal-Palace that was built in the 13th century but destroyed by fire during WWII. As you can see it has been unearthed and reconstructed. 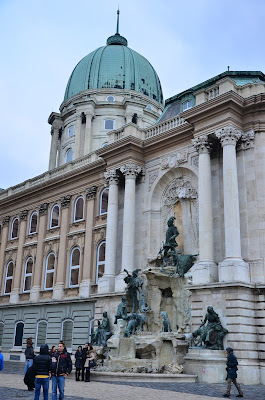 When you’re on the grounds of the Buda Castle you’re surrounded by gorgeous architecture, Parliament, the Chain Bridge and the Danube River infiltrates your view. 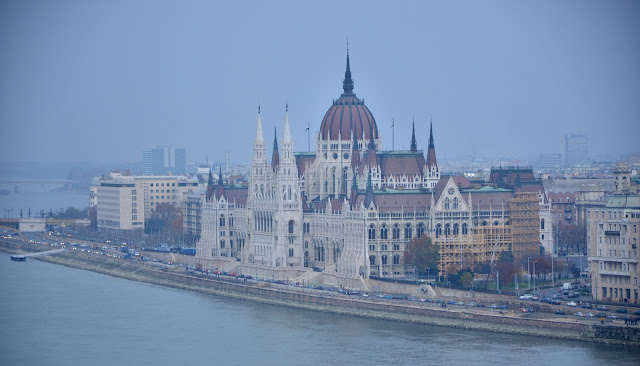 As we journey over and out to take in the Matthias Church, 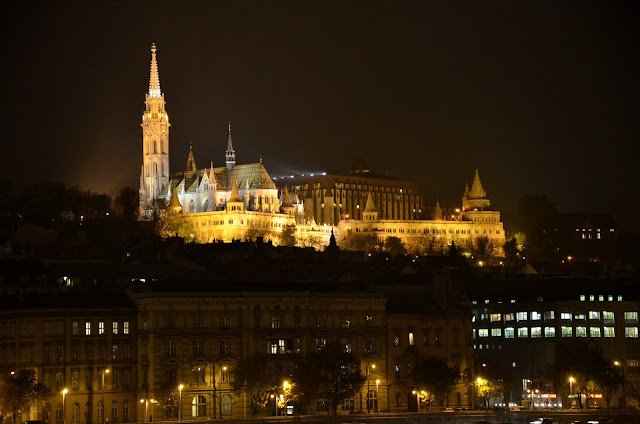 {above at night and below in the day} 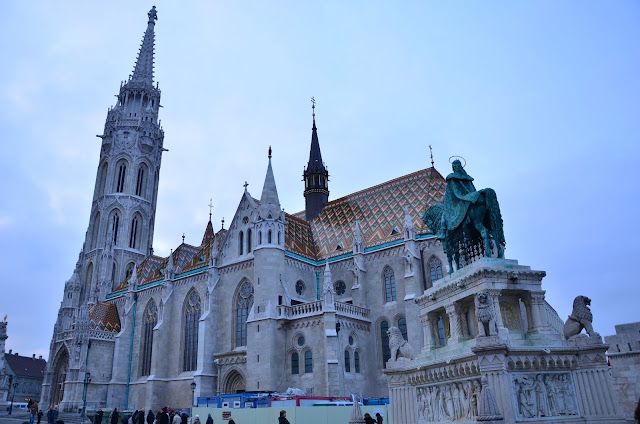 Before we visited this famous landmark in the castle district, we came across some unexpected archery lessons.
These Italian women were being challenged by their men. It was funny watching them take the snarky remarks from their mates. The women actually did better than the men who were all aiming for the bulls-eye. 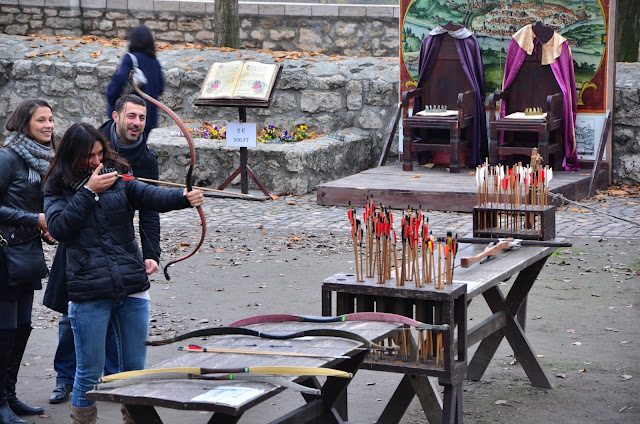 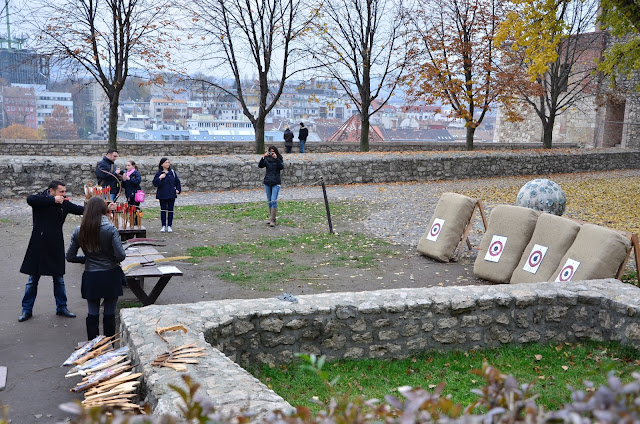 A walk through Hero’s Square, one of the most visited sites in Budapest. 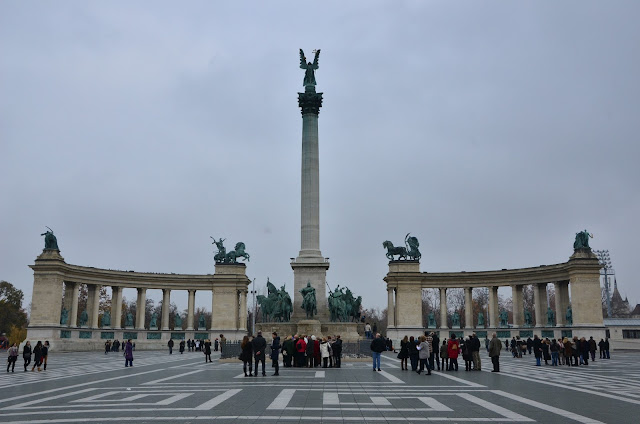 This site brought me an unexpected smile from my son. I was trying to take pictures of my tour guide-trip planner-hero and my mini hero son, but all he wanted to do was photo bomb his hero of a dad, photo after photo….. 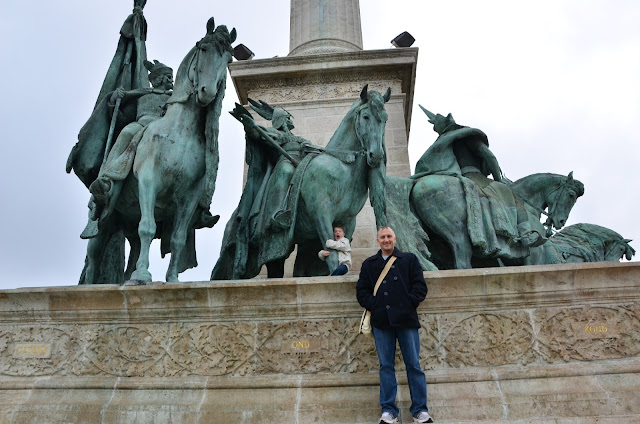 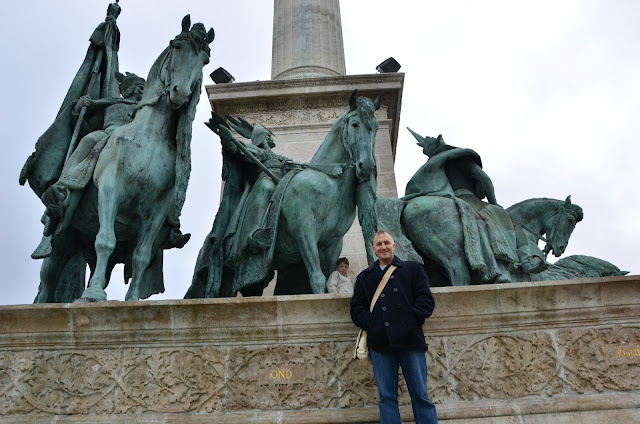 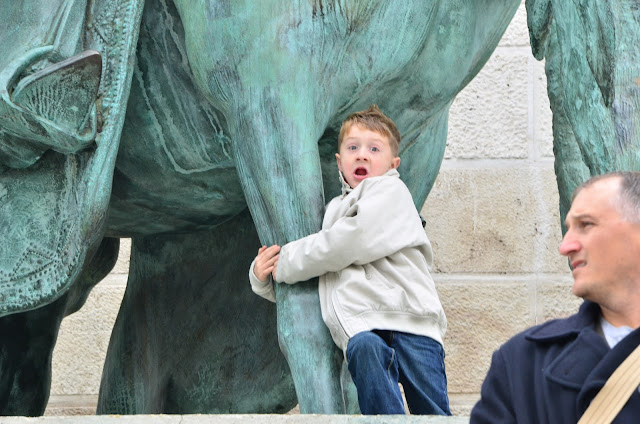 How about watching an American football game? The New England Patriots take on the the New York Giants on a the flat screen television, in a local Hungarian restaurant. 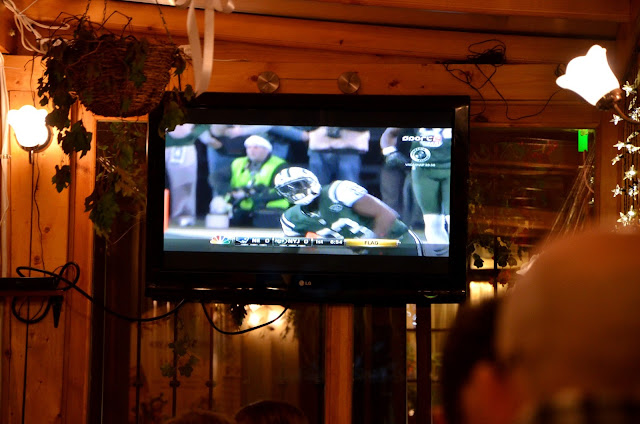 Totally unexpected in eastern Europe!!!
My whole trip was unexpected so I’ll try to wrap up my time spent here.
Three more things that I unexpectedly enjoyed!
All the signs along the walls and on doors, 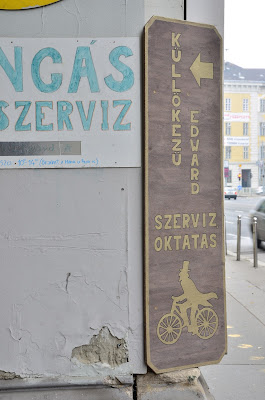 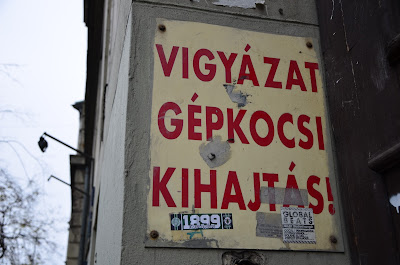 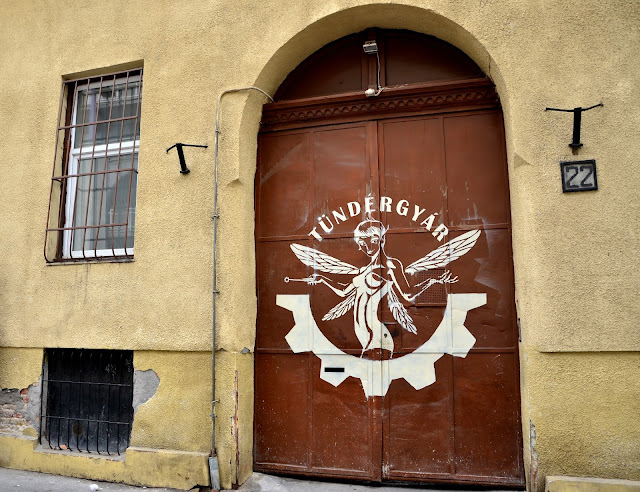 the architecture that surrounded us everywhere, 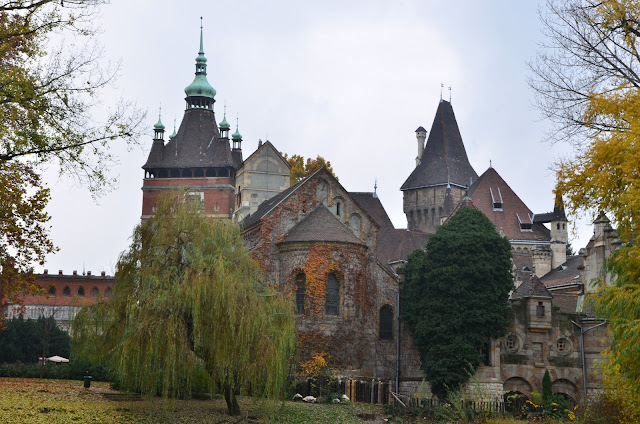 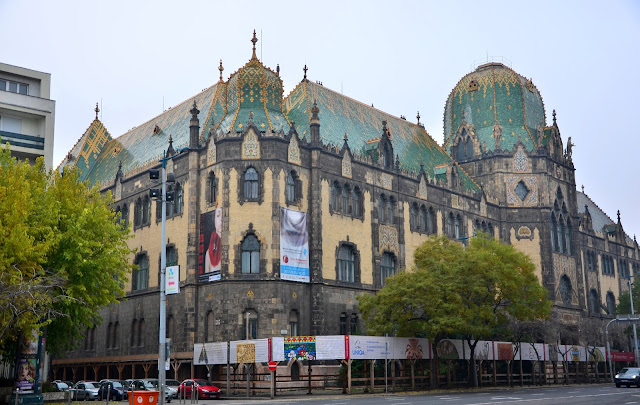 and finally, the amount of fur that was for sale, 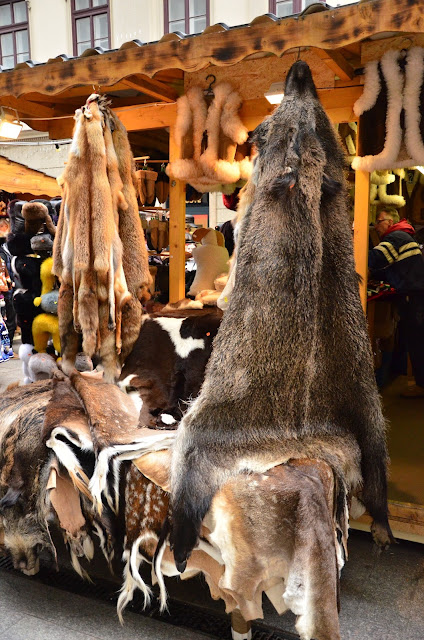 fur walking along in the park, 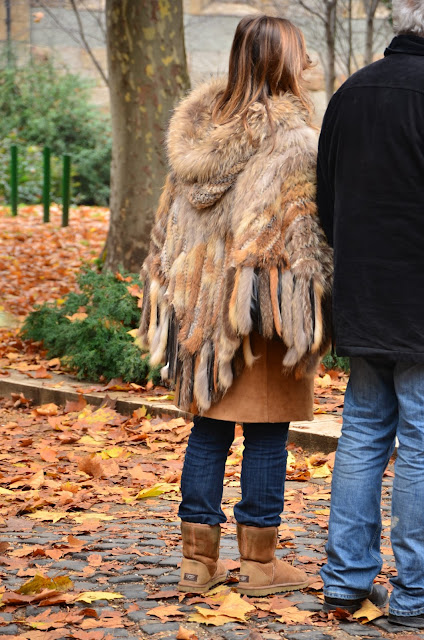 and fur catching the next train. 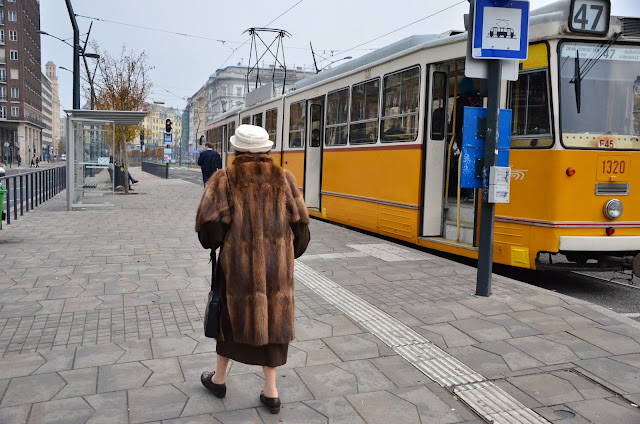 You see it’s very, very cold in Hungary. I know coming from America and being familiar with organizations like PETA, (who are against wearing fur to keep you warm) these unexpected sites could have you in a tizzy. I am not endorsing the slaughtering of animals for their skin I am just revealing what my eyes see as unexpected. That’s all for today off to my next journey into Unexpectedville…. 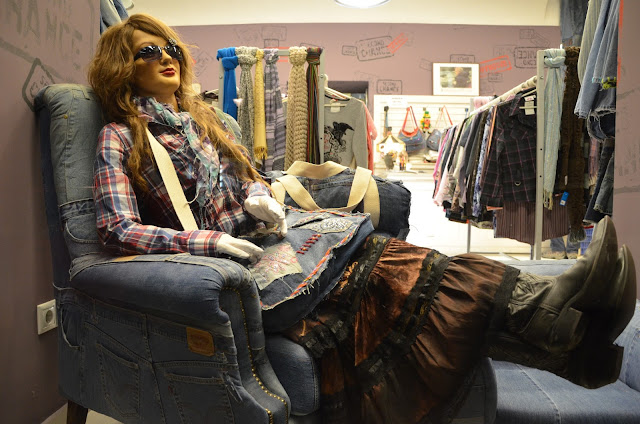