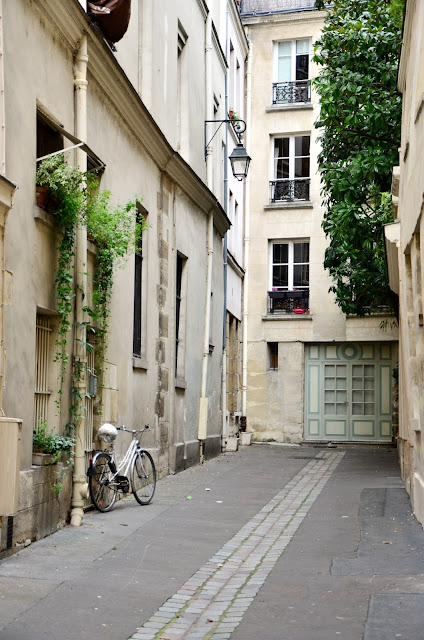 As the seconds tick past and the minutes tock by, the sound of my clock keeps ticking and tocking and just not stopping. How can one catch up in the present when the past needs to be told? It is impossible to list one single famous thing from a city that was established in 250 BC. It’s a city that is a melting pot of influence. From Claude Monet to Vincent van Gogh, French artists that have made impressions around the world gathered inspiration from this city and brought paintings to life. It is a city that is inundated with monuments, delicate food, romance, art, music, fashion and a variety of citizens from around the globe. It is the city of lights.
Today I am re-visiting my time spent in Paris, France. 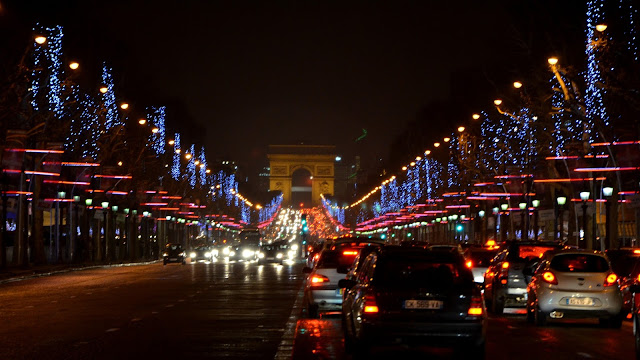 Will I mentally ever leave this city? Can I leave this city? Do I want to leave her?
As we exited the train that was headed into the Montmartre district, a man with an accordion resting at his feet all alone in bright yellow chairs, follows our footsteps as we attempt to climb the stairs and exit this stop. A group of tourists, weighed down from their backpacks-looking down on crumbled maps trying to figure out where they are, politely excused themselves and asked my husband if he knew how to get to Moulin Rouge. 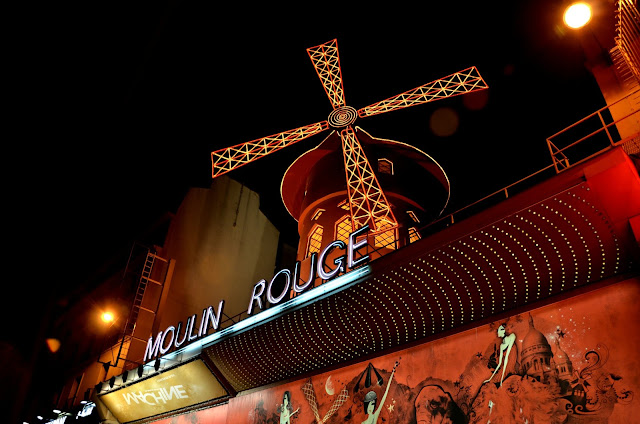 As the group moved towards the map, that is encased along the white tiled wall, fingers begin to walk along the lines along the map-sliding them back and forth, trying to figure out where they were and where they needed to go. My mind exits their conversation as my husband gives them instructions.
We were just there the night before. How could I ever forget that night and my experience in the Montmartre district………… 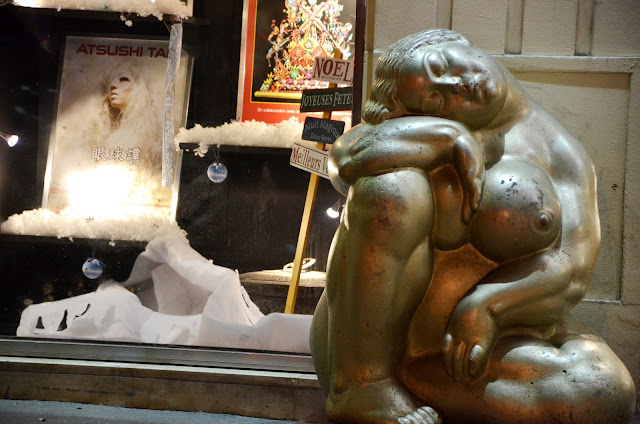 We had just returned from spending the day in Normandy, France. Instead of parking the rental car in the garage and catching the metro into the Montmartre district we just drove there. “I’ll jump out, run up here and take a photo real fast of the iconic Moulin Rouge building. I will be done by the time the light turns green. Just pull over and pick me up.” Well, little did we know the light turned green faster than my time behind the lens needed to expire. Long story short, I hit the pavement running as fast as I could trying to catch up to my husband and son. The traffic was not slowing down and he couldn’t find a parking place along the busy street. My battery was dead in my phone, I didn’t know the make or model of our rental car, all the cars started to look alike. As I ran at full speed, heart pumping faster than I’d felt pump in months, sweat pouring down my cheeks, looking down side streets for signs of a car double parking-listening to creepy old men yell at me as my heavy camera bounced off my chest, I finally see the rental car up ahead a few city blocks later.
I finally see the B for Belgium on the European license plate, pulled over in a spot where electric cars recharge. {Thank God we drove from Belgium to France and the car had that license plate. Otherwise I don’t think I would have found them.} The feeling of being lost, all alone and not knowing how to say or spell the apartment name we were staying at to a taxi cab driver, {if I couldn’t find my family}, was a moment that had me back in a tunnel heading into a black hole. 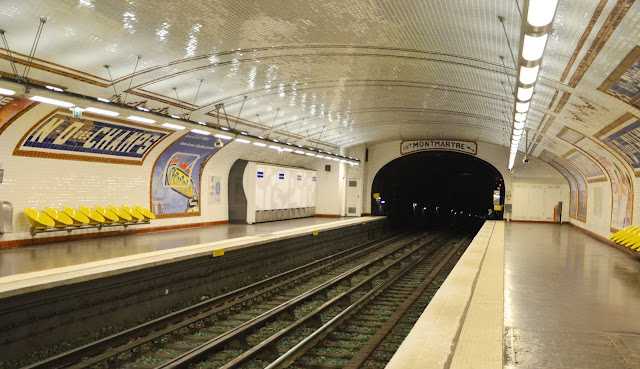 As I mentally checked out, from the question that sparked my trip back into that black hole-feeling lost and scared, I turned and faced the man who peaked my interest as we got off the train headed towards the Montmartre district.
He encompassed what this district is to me, freedom to be who you want to be.
Freedom to dream. 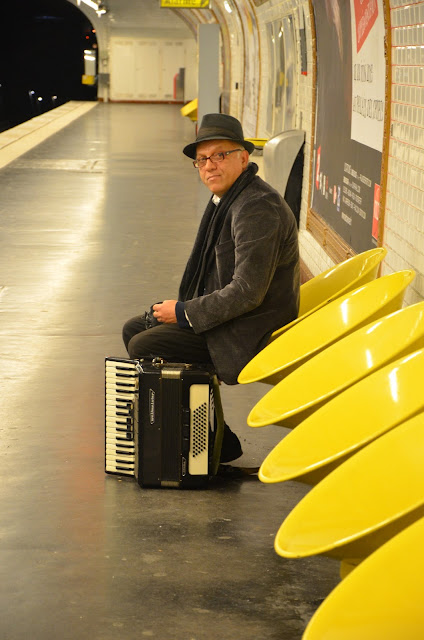 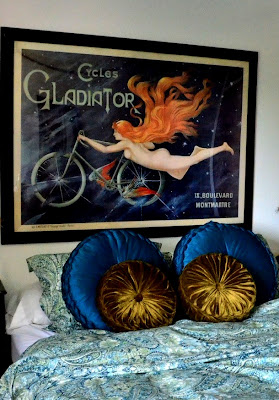 The address on the bottom of the advert is 18 BOULVARD, MONTMARTRE.
So before we hit the hay at night I am transported into a place where artists such as Salvadore Dalí, Amedeo Modigliani, Claude Monet, Piet Mondrian, Pablo Picasso and Vincent van Gogh either had studios or worked in this area. I dream that one day I will return back to Paris and into this district to gather inspiration for a future dream. 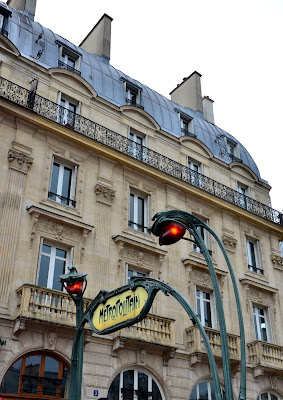 As we move on from the Metro, we discuss and laugh how it never fails, in every city it seems like someone asks us where a location is. We’ve heard, “walk with confidence in your step as you travel, so thieves don’t target you.” I guess we look safe enough to ask a question or two.

Most the time the answer is I’m sorry, I don’t know……We don’t live here.
Once we enter the 2nd largest park in Paris, {the Jardin du Luxembourg} where the Luxembourg Palace sits so beautifully in the gardens. 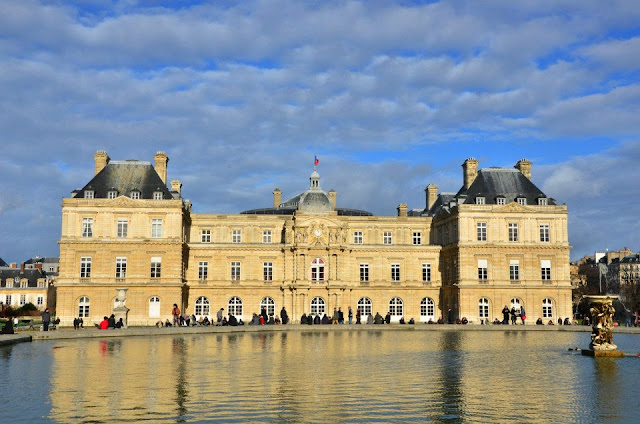 We are greeted with a familiar monument. It’s a symbol of our freedom for Americans.
The Statue of Liberty. 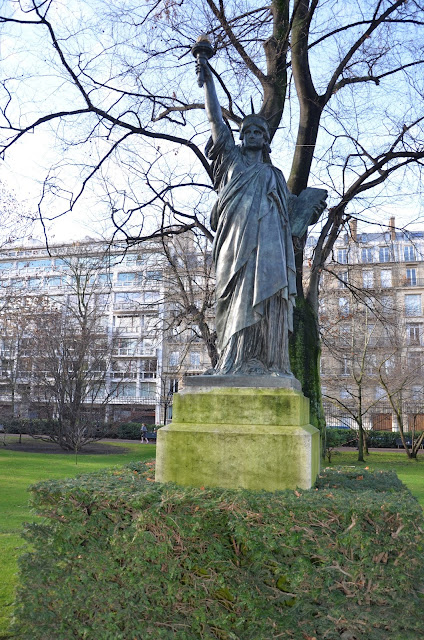 The one above is located in the Jardin du Luxembourg and is the original, created by the French sculptor Frédéric Auguste Barthold.
The one in New York City is a replica and was a gift from France over 100 years ago. There are three of them in the world. Two of the originals reside in France.
One in the west entrance of Jardin du Luxembourg. 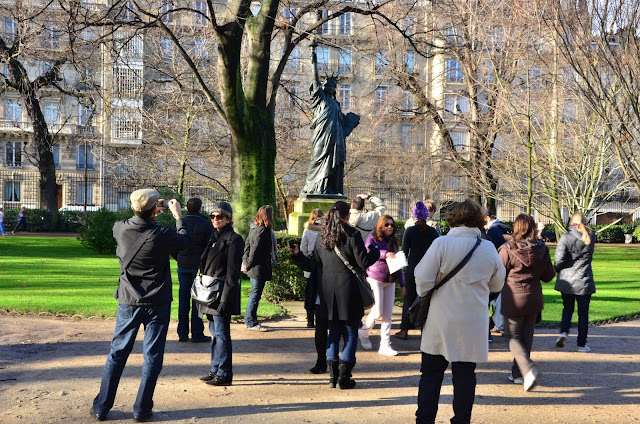 The 2nd on La Seine at Point de Grenelle on l île des Cygnes (Isle of the Swans). 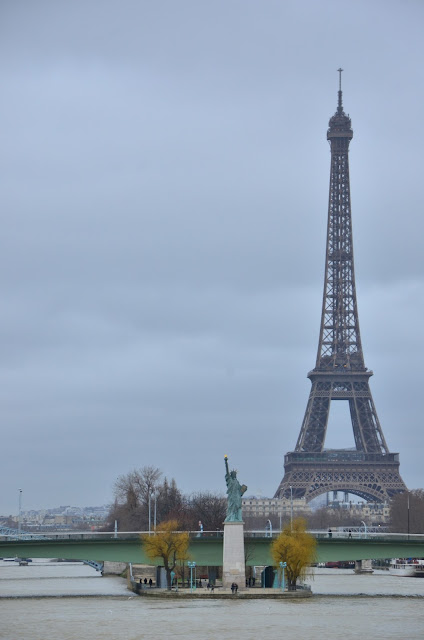 On New Year’s Eve as the clock tick tocked down to midnight we watched the tower as it lit up  from a bridge over the La Seine. 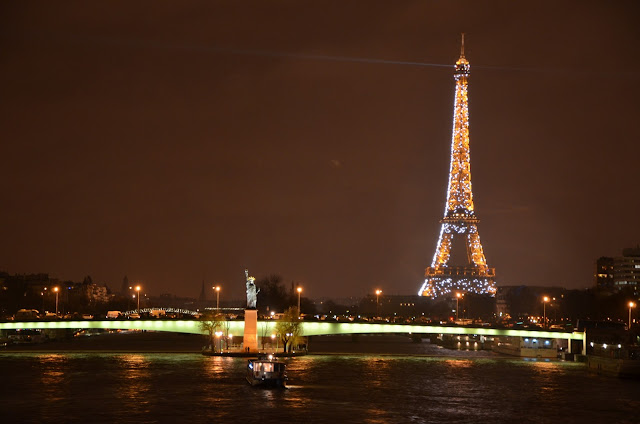 We waited and waited for the fireworks to start along with other tourists. Cars would pull up parking along the streets. Rain was pouring down. Thoughts of maybe we missed something or there was a terrorist threat ran through our mind as the absence of booms and lights didn’t ignite. The security presence was all around the Eiffel Tower that day. One thing that caught us off guard and took our minds off of what was going on was this group of French boys who decided to streak in the freezing cold rain. They ran up to us with their video cameras informing us they were making a video for YouTube and Facebook and to wave and say hi. 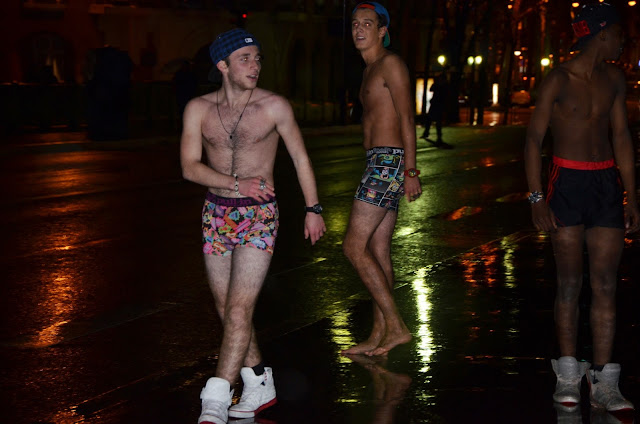 We assumed as the clock ticked down to midnight and we were being entertained by these free spirits, Paris would have fireworks blowing up from the Eiffel Tower. Apparently, not this year.  As we headed to the train and back to the apartment wondering what happened, my stomach still hurt from laughing so hard at the boys who stole the midnight show. We hopped online trying to figure out why there were no fireworks. If you plan on going to Paris to celebrate New Year’s Eve do your research-to see if the year you will be going-will be the year the Eiffel Tower will be putting on a firework show. Even with the absence of fireworks it was still beautiful seeing the Eiffel Tower light up that night. Now as I keep ticking through this hour typing out this blog, I look at numerous photos we took, trying to decide what other moments I should take back from that time and share with you. Once again we are visiting a city so big with so much to view and to eat our way through. 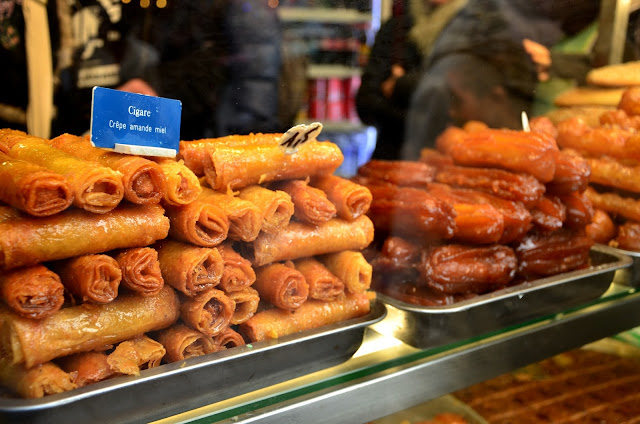 The beauty of visiting Paris during the Christmas season is that you’re treated to the Christmas Markets. They open at the end of November and run until mid-January.
It’s a little bonus to sitting at a sidewalk cafe, sipping coffee, having Fondue or enjoying a glass of wine outside in the open Parisian air. 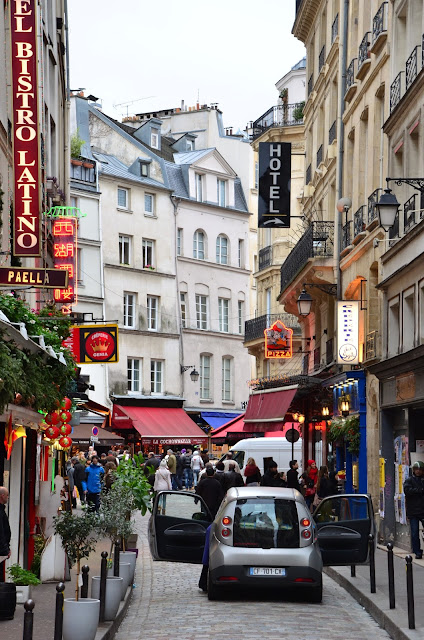 Speaking of air you can’t help but breathe in the love that is blowing all around you.
As we strolled from the Louvre, 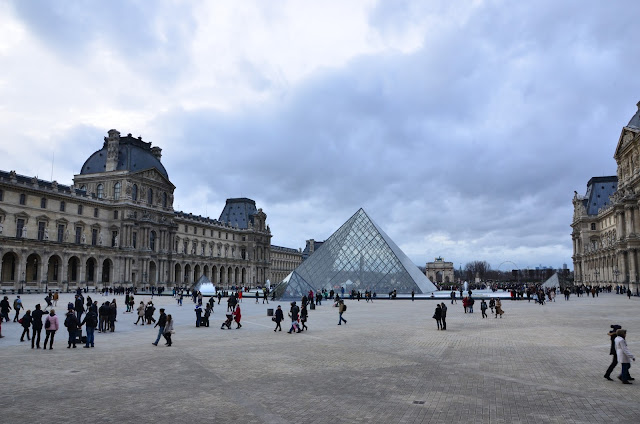 and through the Jardin des Tuileries, taking a break and enjoying a mulled wine in the park- contemplating if we wanted to hang around and get night shots of the Louvre, 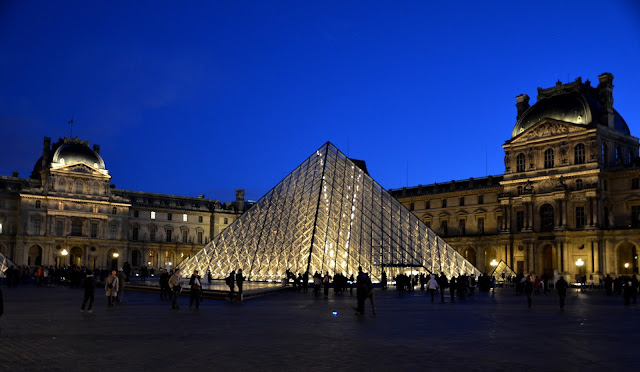 we watched families just taking in the moment of their surroundings. It is one of the best things to do in Paris. Just be—-be in the moment. 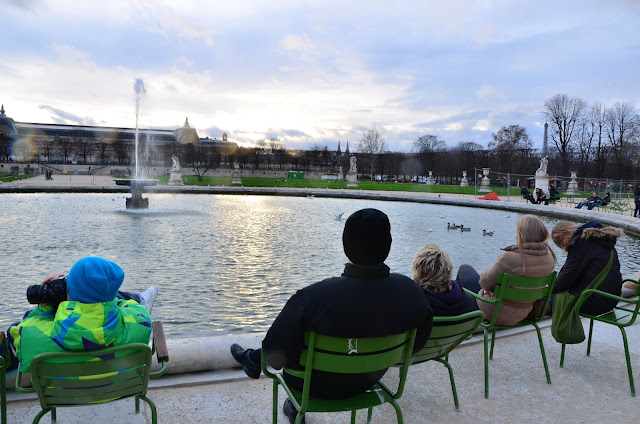 My internal clock has stopped tick-tocking here today. There are many sites we weren’t able to make it to, I guess we will have to go back one day. As I take a mental stroll along La Seine
I hear my little boy singing the song from Monster in Paris about the river La Seine. It was our family theme song as we strolled her banks looking at the beauty around her. 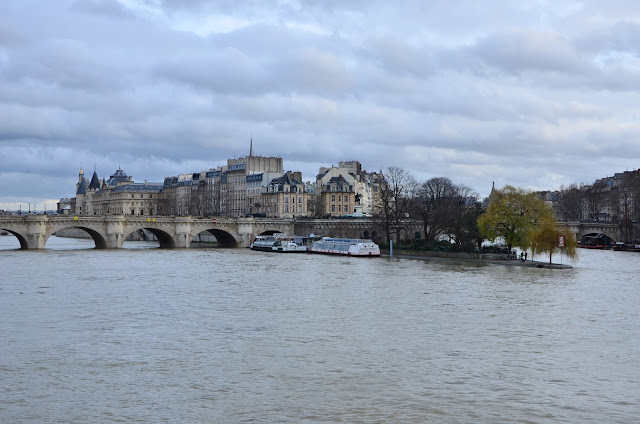 The theme, Monster in Paris was an inside joke between my husband and I. I will leave it as private with many other moments today and
move on with the tick-tock of the clock. 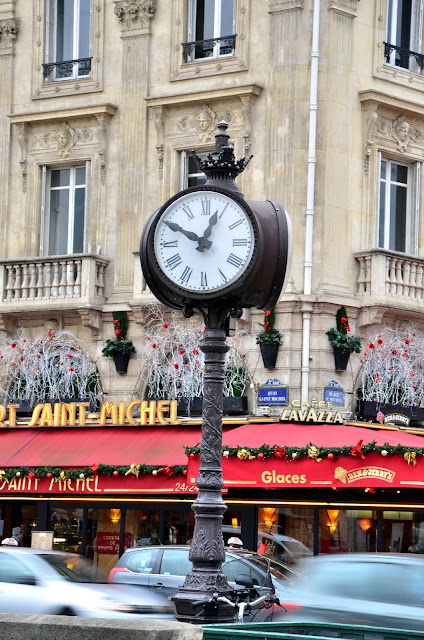